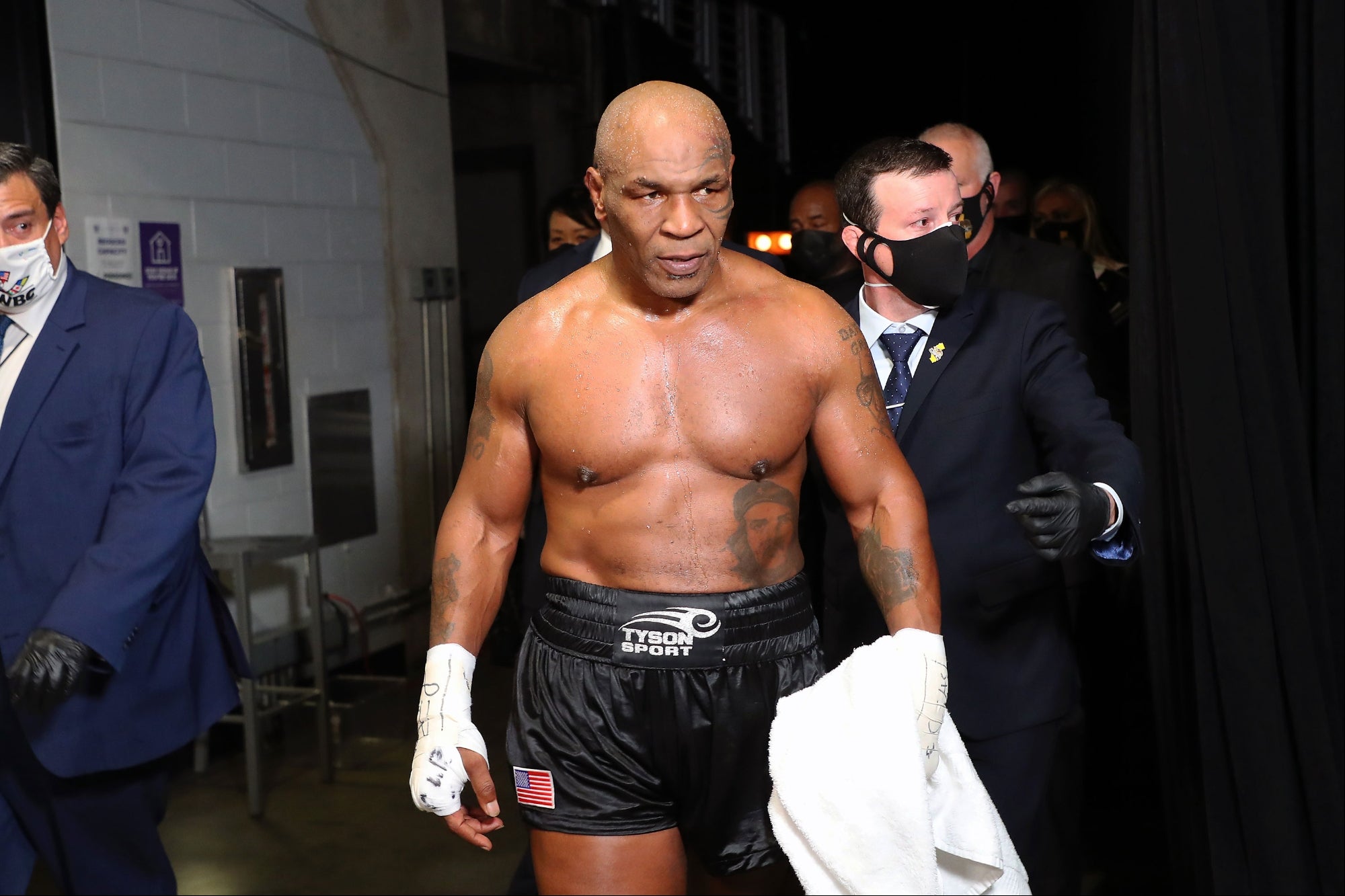 Opinions expressed by Entrepreneur contributors are their own.

Last November a 54-year-old Mike Tyson stepped into the ring for the first time in 15 years to face Roy Jones Jr who was just 3 years Mike’s, well, junior. The exhibition match and merciful (from Tyson’s trying-not-to-kill-him end) 8 round draw was a huge success. The event made millions per record pay-per-view buys and restored the kind of spotlight our champ hadn’t enjoyed since The Hangover premiered.

Iron Mike entered LA’s Staple Center a different man than the one who quit on the stool during his fight against ham-and-egger Kevin McBride over a decade ago. The troubled legend fought to earn money he’d already spent and he was neither feared by his opponent nor beloved by the public.

After his retirement, Tyson came to the realization that destroying contenders’ faces came at the expense of destroying his own future. In 2019 Mike told The Joe Rogan Show that he was too afraid of his inner ass-kicker to even hit the gym. But then something changed

In a follow-up interview, a year later,Tyson excitedly told Rogan he’d once again seen the Sweet Science light and was training for a midlife comeback.

Everyone has a plan until they get punched in the face

This is a phrase that Mike mouthed for years. In Tyson’s prime, he was known for a legendary windup that started from way down in a crouching position. Mike maintained he’d imagine his fist exploding through the back of an opponent’s head. If any of Tyson’s opponents wanted to survive, the best strategy was to crowd him so he couldn’t deploy that devastating weapon—which is exactly what Jones did through much of the fight.

But Mike started attacking Roy with body shots from the clinch. In total, Tyson landed 35 of them with Jones admitting that they drained his energy in later rounds. Mike was never known as a closeup fighter, but after all these years, the old dog had indeed learned new tricks.

If you want to make it in this market, you have to adapt. Continuing to do the same thing you did before and expecting similar results is as mad as it sounds. As entrepreneurs, we have to absorb fresh strategies. What worked twelve months ago is no longer applicable today. We need to constantly look for innovation in our marketing, sales and service.

Related: The One Investing Tip From Billionaire Mark Cuban That’s Perfect For Entrepreneurs

Be clear on who you’re fighting and why

In the post-fight press conference, Tyson declared: “I haven’t done this in fifteen years, I’m not a giant, I’m a beginner!”.

Although it evoked laughter, he was completely serious.

“Before it was all about me and the hot chick, the nice car, the planes and the boats, but that doesn’t do it for me anymore,” admitted Mike. “So I went another way.”

In this heyday, Tyson hit the greatest heights and slunk to the lowest lows. But in the years since his humiliating defeat to McBride, he’d successfully rehabilitated his image. With the help of wife, Lakiha Spicer, he landed acting jobs, made investments and signed endorsement deals. Per this fight Mike raised millions for charity and changed his image, once again, to a man who fights for others.

If we choose income, we’re always going to be chasing the next payday. If we choose to make a difference, we will be remembered. Get clear on who you’re fighting for and why you fight.

Why did Mike decide to get back in the ring? He had nothing left to prove. When asked that very question he replied with: “Because it’s what I fear the most.”

In order to fight Tyson had to conquer the opponent that was himself.

Mike had spent over a decade being afraid of the darkness within. He never picked up the gloves, or lifted weights, because he knew his ego would erupt the second he started showing off. But when a short video of him hitting the pads went viral, the word was out that he was back.

Tyson had been beat up more in 16 minutes than most of us will in our entire lives. Yet the champ claimed he felt “splendid” and wanted to “beat it up some more.”

Mike pulled punches so as to finish the marathon with Roy rather than go for a KO.

“I think going the distance, that’s real fighting,” said Tyson. “Having the endurance, that [was my goal], because you’re not going to knock everybody out.”

Mike then thanked his sparring partners who’d been pummeling him, weeks prior, so as to prepare for whatever Roy was bringing.

Entrepreneurs fail the moment they get comfortable. We begin to react instead of create. The moment you decide to face your fear is the moment you get stronger and learn. The key to success in being calm amidst the chaos.

In the post-fight interview, Tyson revealed he was afraid of getting hurt. Most of us see someone do something dangerous and think they must be fearless. Tyson was afraid, and that’s why he landed 67 of 193 punches, which means only a third of his heat hit it’s intended target. There’s a lesson within that statistic.

Tyson kept pummeling hoping something, anything, would connect because if he didn’t? Jones would’ve knocked him out. It’s as simple as that.

Fifteen years ago, Mike chose to give up rather than take the punches. It was an ignoble end to a tumultuous career. But life didn’t stop throwing punches, so he strengthened his emotional fitness, and evened the score.

I believe entrepreneurs are similar to gladiators. We go all in, take the risk and most of the time there is no backup plan. We have no choice but to make it work. When things seem that they are not going the way we expect them to, that’s the moment that we have to double down and stay in the ring. If you want to succeed as an entrepreneur, quitting is not an option.

My challenge for you is to get in the ring. Just because the past year is thankfully at an end, doesn’t mean 2021 won’t stop throwing punches at you. It doesn’t matter how many fights you’ve won or lost, the question is: Are you going to get stronger or are you going to give up?

Related: 3 Things LeBron James Can Teach You About Business Growth