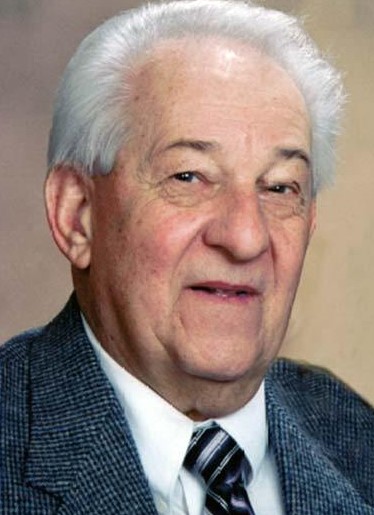 The longtime steelworker remained active in the United Steelworkers union after his retirement.

The Alliance for American Manufacturing is sad to report that AAM site coordinator and longtime steelworker Henry “Hank” Sadinski passed away on Sunday, Nov. 15. He was 89.

Sadinski (ne Zasadzinski), spent his dedicated career as a scarfer in the Inspection Department of Republic and LTV steel companies in Northeast Ohio. He was a respected leader and colleague in his United Steelworkers (USW) local chapter and served as the union grievance man until his retirement in 1985.

He remained active in the Steelworkers Organization of Active Retirees (SOAR), and most recently served as SOAR Chapter 1-27-6 President. Sadinski became the site coordinator for the Steelworkers ReUnion retirement organization and held the same position with AAM since its inception.

“Hank will be dearly missed. He always had a smile on his face when I saw him perform countless acts of advocacy over the years,” Paul said. “He genuinely cared about working people and his community.

“May his memory be a blessing.”

Sadinski was born on January 19, 1931 in Youngstown, Ohio, in what was then the center of a prosperous steel industry. He graduated from Woodrow Wilson High School in 1949 and was a proud United States Navy veteran. He was stationed aboard the USS Blue destroyer in Long Beach, Calif. during the Korean War.

Sadinski served for many years on the Senior Advisory Council at Direction Home of Eastern Ohio, previously known as the Area Agency on Aging. He was a member of the Holy Apostles at St. Stephen of Hungary Parish where he sang in the choir and was an active member of the parish senior citizen group.

Ken Poweski is the AAM field coordinator for Ohio and often worked with the assistance of Sadinski.

“Hank was a great advocate and union activist,” Poweski said. “He was always interested in politics and over the years we worked on numerous events together, from town hall meetings to round table discussions.

“He was a good friend with a great smile and a kind word for all those he met. Hank will be greatly missed.”

In retirement, when he was not advocating for and assisting his former USW colleagues, Sadinski loved playing golf and was a member of several leagues, including the Mahoning Seniors at the Mahoning Country Club. He also enjoyed polka dancing, fishing, playing cards and spending time with family and friends.

In death, Sadinski leaves behind a daughter Kathleen (David) Basista and son Robert (Christine) Sadinski, four grandchildren and two great-grandchildren. He was preceded in death by his wife, the former Mary I. Mislai, and siblings John, Joseph, Frank, Walter and Sister Helen Zasadzinski of the Franciscan Sisters of Chicago.

Because of the current coronavirus pandemic, the family held a private viewing and Mass of Christian burial. Donations in Sadinski’s memory may be made to the Direction Home of Eastern Ohio, 1030 N. Meridian Road, Youngstown, OH 44509 or the Mahoning County St. Vincent DePaul Society, P.O. Box 224, Youngstown, OH 44501.