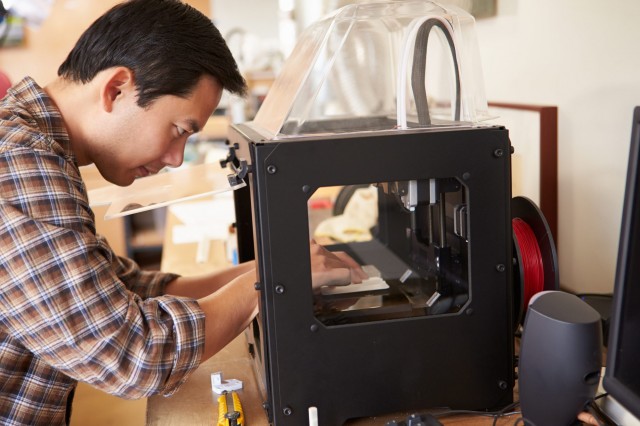 Historically, the Army has run into trouble with parts produced with affordable desktop 3D printers in the field. Parts created with fused filament fabrication (FFF) had poor strength and were not reliable, which is critical at deployed locations. To take on these deficiencies, the Army Research Lab at Aberdeen Proving Ground (APG), Maryland developed a new material that will allow soldiers to use low-cost printers to create parts that will stand up to the elements and to the intense use in the field.

A team headed by Dr. Eric D. Wetzel, research area leader for Soldier Materials at the U.S. Army Combat Capabilities Development Command’s Army Research Laboratory, used a new thermal draw process to fabricate a dual material filament that is then used as feedstock in a conventional 3D printer to create parts with a composite ABS (acrylonitrile butadiene styrene )/polycarbonate core structure that provides mechanical properties competitive with injection-molded plastics. The research team is experimenting with new materials and procedures with the goal of improving mechanical properties and reducing annealing times of 24-48 hours to four hours or less.

Jeff Wallace, a mechanical engineer with the Army’s Command, Control, Communications, Computers, Cyber, Intelligence, Surveillance, and Reconnaissance Center (C5ISR) Center at APG explained, “Having the option to additively manufacture parts from a high strength polymer via the FFF process, at the field, division, and/or depot-level will certainly provide warfighters with the ability to produce better temporary parts much quicker – hours versus days or weeks – and at significantly lower costs – often pennies compared to tens of dollars. Additionally, soldiers tend to improvise as needed, often finding their own design solutions to the issues they face. As such, offering them a higher strength polymer material that can be used in the desktop printers they have access to, affords them the opportunity to innovate on-the-fly, as necessary to temporarily solve greater numbers of supply and design challenges. Their designs would then be sent to the proper Engineering Support Activity for evaluation.”

The Army sees great potential in this technology and is looking for additional commercial partners to accelerate development.