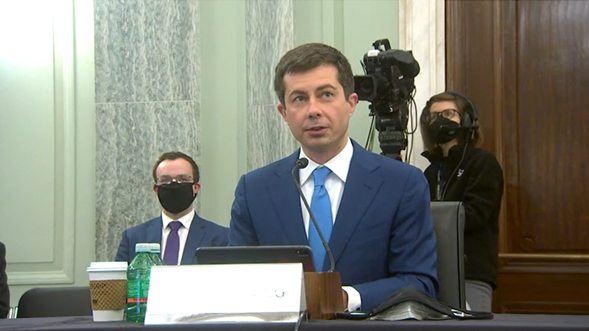 Transportation Secretary nominee Pete Buttigieg told Senators on Thursday that he “strongly” supports including Buy America in any infrastructure investment package put forth by the Biden administration – and also is “looking forward” to working on efforts to close Buy America loopholes.

During his confirmation hearing before the Senate Committee on Commerce, Science, and Transportation, Buttigieg touted Biden’s “Build Back Better” initiative, telling the panel that “we have a lot of work to do to improve the infrastructure in this country, a mission that will not only keep more people safe, but also grow our economy.”

“Now is the time, and we have a real chance to deliver for the American people,” Buttigieg said. “We need to build our economy back, better than ever, and the Department of Transportation can play a central role in this, by implementing President Biden’s infrastructure vision — creating millions of good-paying jobs, revitalizing communities that have been left behind, enabling American small businesses, workers, families and farmers to compete and win in the global economy, and tackling the climate crisis.”

Sen. Tammy Baldwin (D-Wis.) was among the Members who asked Buttigieg about Buy America specifically, pointing to loopholes that allow taxpayer funds to be used to purchase products that are not Made in America.

Baldwin pointed out that while Congress passed legislation in 1978 requiring that manufactured products be subject to Buy America rules, the Transportation Department has frequently provided a blanket waiver for manufactured goods made outside of the United States, including frequently purchased items like traffic lights, highway signs, and highway cones.

“The goal is to make sure as much as possible of this is Made in America,” Buttigieg replied. “If confirmed, I do commit to looking at what we can do to adjust or change or perhaps rescind that provision.”

Baldwin shared another critical example: In 2019, Congress passed bipartisan legislation that prevents federal grant money to going to Chinese state-owned or state-subsidized companies (SOEs) to build transit, including rail cars and buses. But the Trump administration provided a permanent exemption to transit agencies that are currently working with Chinese SOEs, going against Congress’s intent in passing that measure.

“This is something I’ll look into right away, because I know it’s very important to meet Congressional intent,” Buttigieg responded.

The importance of infrastructure investment dominated Thursday’s hearing, and Senators in particular appeared especially interested to hear about the new administration’s plans for electric vehicles (EVs). Buttigieg noted that Biden wants to build out a new network of 500,000 EV charging stations, which will be critical to encouraging Americans to purchase these vehicles. While the cost of EVs have decreased in recent years, many consumers still have “range anxiety” – meaning they worry they won’t be able to charge their vehicles if they need to while on the road.

But Buttigieg emphasized that a transition to clean energy vehicles like EVs is critical to reducing carbon emissions and addressing climate change. And he thinks there’s a window right now to getting the job done.

“American companies and American workers should be leading the way,” he added.

Issues of safety also came up during the hearing. Sen. Amy Klobuchar (D-Minn.) recalled the 2007 collapse of the I-35W Mississippi Bridge in Minneapolis, which killed 13 people and injured 145 others. The federal government has a role to play in ensuring catastrophic failures like this do not happen again, she said.

Buttigieg agreed. “So often, states and counties and other local governments are expected to maintain these bridges but don’t have the resources to do it,” he said.

Multiple Senators also expressed their support for the Jones Act, which requires all goods transported by water between U.S. ports be carried on U.S.-flag ships. Buttigieg testified that he also supports the act.

“It is so important to a maritime industry that creates hundreds of thousands of jobs, as well as the shipbuilding industry,” Buttigieg said.

You can watch the entire confirmation hearing here. AAM’s own Scott Boos discusses Build Back Better, and the importance of Buy America, on the episode of The Manufacturing Report podcast embedded below.