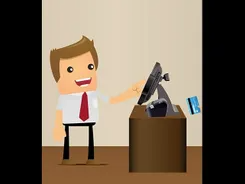 The news comes out from the 2018 Diary of Consumer Payment Choice, the fifth in an annual survey overseen by the Federal Reserve banks of Atlanta, Boston, Richmond, Va., and San Francisco. The research draws on a nationally representative panel of consumers who record all their purchase and bill-pay transactions and amounts over several days. The  year’s group included 2,873 participants who recorded transactions for at least four days in October.

“In October 2018, consumers made more payments with debit cards than  with any other payment instrument (28% of payments),” the survey report says. “Cash, in all prior diary years the most-used payment instrument,  followed with 26% of payments. Together with credit cards (23%), these  instruments accounted for slightly more than three-quarters of the  number of payments.”

It’s estimated, U.S. consumers made 43 payments for the month (rounded, 34 purchases and 10 bill payments), up by two from 41 in 2017,but still lower than the 46 researchers found in their 2016 survey. While debit cards led in usage last year, six of nine payment types analyzed had higher dollar values.

Consumers made an average of 12 payments per month in cash in 2017, and the researchers say the decline of one transaction found  in the 2018 survey is statistically significant. Three payment  types—debit cards, credit cards, and online-banking bill pay—showed  statistically significant average increases over the year, rising by  1.3, 1.6, and 0.6 transactions, respectively.