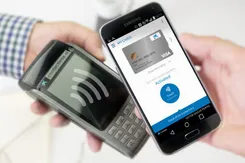 Fiserv Inc. said this week they have performed the first PIN-on-mobile contactless transaction involving only a mobile phone. This capability could expand the availability of PIN-on-mobile technology significantly by allowing small merchants to accept card payments with no more hardware than their mobile phone or tablet.

“This simplifies payment acceptance by allowing merchants to accept PIN-based contactless transactions without the need for a separate card reader or PIN-entry device, opening new market opportunities for merchants and allowing even micro-businesses to accept non-cash payments,” Fiserv says in a news release.

Collaboration in the project by Visa Inc., along with technology from handset maker Samsung Electronics Co. Ltd. and EMV software provider PayCore, allowed the transaction to take place, Fiserv says, in compliance with industry standards. In separate rules set out in 2018 and last year, the PCI Security Standards Council LLC requires an external card reader for PIN-on-mobile payments and a separate PIN Pad for PIN-based contactless transactions read by an off-the-shelf device. Visa and five other global payments networks founded PCI SSC in 2006. The Wakefield, Mass.-based organization manages the global PCI data-security standards.

“The solution was developed with Visa and has been certified by Visa to comply with the PCI DSS requirements,” says Nigel Motyer, senior vice president of global business solutions at Fiserv. “The solution underwent independent security testing before receiving approval from Visa. So, rather than being an exemption, it’s a new way of meeting the PCI requirements.”

How soon the new technology will become widely available is not yet known. It is available on “select” Samsung handsets, Fiserv says, and relies on NFC functionality in the device. A payment can be initiated with a contactless card or NFC-enabled devices such as phones or wearables, Fiserv says.

The technology has been through security testing and has entered a pilot in Poland, Fiserv says, with immediate plans to make it available in the Europe, Middle East, and Africa and Asia-Pacific regions. Other parts of the world could soon follow. “The solution is being built using a protocol that will enable global deployment, and is being evaluated for rollout in North America,” says a Fiserv spokeswoman.

For now, the company sees an urgent need among small sellers equipped only with off-the-shelf handsets. “Contactless chip-and-PIN payments are common, yet over 23 million micro merchants in Europe alone may lack terminals to accept them,” says John Gibbons, executive vice president and head of EMEA at Fiserv, in a statement. Competitors see much the same opportunity. “We expect the market to grow and expand exponentially,” says Sam Shawki, chief executive and founder of Magic Cube, Inc., in commenting on this week’s news. “So yes, it is good news for all except for the [POS] device makers for now.”