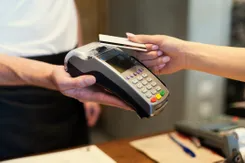 Just how many merchants will take advantage of the networks’ new signature-optional policies remains to be seen. The market expects more than half of merchants will stop requiring cardholder signatures at the point of sale.

Mastercard last year was the first card brand to come out with their new option for US and Canadian merchants not requiring signatures for credit card transactions beginning April 13, 2018. In December,  Discover and Amex announced similar policies to take effect April 13, leaving Visa the last man standing holding on to their policy requirement. Well, in January that all changed. Visa disclosed that in April it would pitch its signature requirements for credit card card transactions in North America.

More than likely many merchants will continue to require cardholders to sign for purchases that involve tips, high volume transactions, car rentals, and some local law organizations.

Visa’s policy only applies only to merchants that accept EMV chip cards. 59% of U.S. storefronts now accept chip cards, according to Visa. Most of the merchants still not accepting the chip card are small businesses. However, some major retail sectors such as gas stations and supermarkets are still upgrading from magnetic-strip cards.

Acquirers at this time do not know just how many merchant will take advantage of the new non-policy since it is at the discretion of each individual merchant. In our opinion,