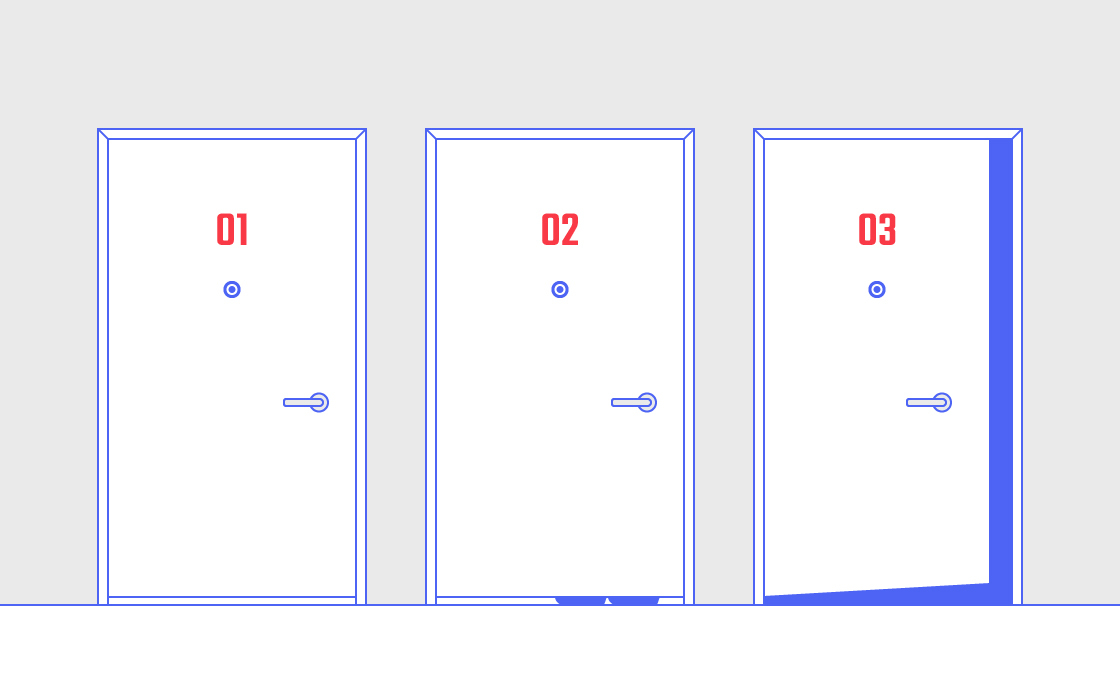 I was locked out of my flat.

This was a problem. I was down a phone, wallet, chewing gum and, crucially, keys. And I was in my socks.

All I had to my name was the Deliveroo I’d collected moments before a gust of wind slammed the door behind me.

Plans to paint my living room were on the backburner.

“This isn’t the Saturday night I had planned,” I mused as I sat outside my front door gnawing on my peri peri chicken burger.

Still, there was hope.

Despite being a fairly new resident, I’d had a couple of those slightly awkward “Hey, you alright? Good thanks, yourself?” moments with both neighbours on my floor.

All I needed was to borrow a phone to call a locksmith.

I knocked on next door, stepped back and waited. Silence.

I knocked again. Nothing.

They were a couple with a young child, so I figured they were putting her to bed/preoccupied with doing parenting things.

I knew two young women lived there – I’d met one of them the day I moved in, and seen the other out and about on our floor.

There was music coming from inside. Jackpot.

I knocked on the door, stepped back and waited. I heard shuffling as someone looked through the peephole.

The door didn’t open. Some more shuffling. The music stopped.

I knocked again and took a giant stride back, whilst putting on my best “I swear I’m not a criminal” smile.

Another look through the peephole, some faint muttering. The door didn’t open.

This wasn’t what I’d expected.

I was low on options, so I sat back down in front of the impregnable fortress that was my flat and tucked into a side of potato wedges.

As I did, I saw the shadow of two feet appear under the second door – the peephole lurker was back.

Third time’s a charm? How threatening could I look squatting in my doorway with burger sauce smeared across my face?

Apparently more threatening than I thought, because the door still didn’t open.

Then a lightbulb moment. I remembered the building director lived on the seventh floor.

Figuring (hoping, praying) there was a magic master key that fitted my lock, I ventured up.

I had no idea which flat he lived in, so I knocked on the first one I saw.

After a moment, the door opened to reveal a young couple.

My relief quickly turned to despair – not only were neither of them building directors with a set of magic master keys, but they revealed the man himself was out of town.

At this point it’s getting late. My ‘knock-smile-hope’ policy was running out of time.

“Hang on… I think another director lives on the third floor,” the woman said. “Yeah, you’re right,” said her partner. “We can’t remember his flat number, but maybe he can help.”

Thanking them, I bounded back downstairs towards what was surely my last chance.

I picked the first flat I saw, took a deep breath and knocked.

Before I could step back, the door opened.

“Hi I’m James are you the building director I’m locked out and I know it’s late but I don’t have my keys and I know I don’t have shoes but do you have a magic master key to help me get into my flat?”

“Look I can explain where the shoes are, just… wait, what?”

Before I knew it, I was sitting in Pete’s living room, chatting with his wife Angela and their two young children.

While neither were building directors, it turned out they’d lived there for over 10 years and knew just about everyone.

Toolbox in hand, Pete and I tried to jimmy the door open – annoyingly (but kinda reassuringly) we couldn’t get in.

Back in the flat, Pete and Angela handed me a phone and laptop to call a locksmith. And if worst came to worst, they had a sofa bed I was welcome to sleep on for the night.

The locksmith came – but not before the kids had shown me their favourite books and given me a piano recital.

An individual act of kindness

In the last few weeks, I’ve seen people talk about systems, structures, institutions and groups – every collective noun you can think of.

A lot of what’s been said has been incendiary, divisive and sometimes plain malicious.

I think it’s easier to do that when there are no faces to put to the insults.

I think we’ve forgotten about the individual. That’s what I am. And that’s what you, valued reader, are as well.

As a marketer, I spend my time persuading lots of people to buy stuff. But if I don’t start with an individual in mind, I’ve failed before I put pen to paper.

I’m 6’4”, mixed race and in my mid-twenties. On this particular night I was wearing an old tracksuit, a scruffy beard, a grubby Arsenal shirt and an extra-nappy haircut.

Pete and Angela (a white, middle-aged couple for what it’s worth) saw me and treated me as an individual when they opened the door. Not a black man. Just a person who needed some help.

A lot of people have asked what I think about recent events. Like everyone else, I don’t have the answers.

I think the best any of us can do is ask ourselves, “Would I have opened the door?”

And if the answer makes you uncomfortable, ask yourself why. That’s a start.

It wasn’t the Saturday night I had planned, but I’m glad it happened.

Even if it did include the most expensive Deliveroo I’ll ever order.